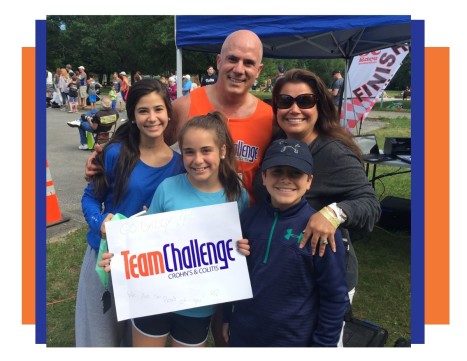 Sydney was diagnosed with Crohn’s Disease two weeks before her ninth birthday. We became very concerned after a few months of significant weight loss and many days of her just not feeling well! After spending two weeks on a family vacation in Hawaii and visiting nearly every bathroom on the island, we talked to her pediatrician, and finally a GI, to determine what was going on! We had never even heard of Crohn’s disease! The diagnosis hit us hard but the doctor said it was “mild” and prescribed the most benign meds. We were hopeful! But looking back, so naïve!

Fast forward six years, many failed medications, lots of doctor’s visits, too many colonoscopies, endoscopies, MRI’s and infusions to count, blood work, ER visits, missed school time and many many ups and downs. Sydney has not had a great time or great luck getting to remission. But I am thrilled to say she started Entyvio in November 2016 and has been feeling the best she’s felt since diagnosis! Her disease has gone from mild to severe and nothing had really helped longer than a few months until Entyvio!

Almost immediately after Sydney’s diagnosis, we became involved with the Crohn’s and Colitis Foundation! I needed more info, and more support dealing with this new diagnosis! We signed up for the Take Steps walk in Boston and had thirty family members and friends walk with “Sydney’ Soldiers” that year! Shortly after the walk I received a post card for Team Challenge! I would never really consider my husband and I runners but we had done a few 5k’s in the past so why not!! We signed up to run a half marathon in Las Vegas in 2012. I remember showing up to that first training session alone, afraid, and overwhelmed at the thought of running 13 miles! That first training day changed my life! I met some of the most wonderful people that day who I now call friends!! I no longer felt alone in this! I met so many parents of other young children struggling with IBD just like my Sydney was! Those training runs were hard! Especially when we started running many miles in the cold! But I looked so forward to those Saturday morning runs! It was like a therapy session for me! Talking to other parents and sharing advice helped so much!! Running with IBD patients was so inspiring!! It made me keep moving along when all I wanted to do was stop!! It gave me hope that one day my daughter would be well enough to run with Team Challenge herself!!

Our family is so grateful for the Crohn’s and Colitis Foundation! Since that first half marathon in Vegas, my husband and I have run three more seasons and every season met the most wonderful, supportive, inspiring people! Sydney has gone to Camp Oasis for the past six summers and has found such a great support system there! It has been a life changing experience!!

This disease is tough! It’s so much more than a bathroom disease! It also takes a toll on a patient’s mental health too. It can feel very isolating at times! When Sydney isn’t feeling well, it affects our entire family. Her brother and sister have been so great! There have been times we’ve had to cancel or change plans last minute because Sydney isn’t feel well. Fortunately, they’re understanding and supportive! When you have a child with a chronic illness there is definitely more stress on the family unit. Lately, we’ve had more good days than bad, and I am thankful for that! I also know that things can change in a second and I sometimes fear for what the future holds for Sydney! Watching your child suffer and not being able to take away the pain is brutal! There are so many days we feel completely helpless! But I remain hopeful that we are getting closer to that cure!! And praying it happens so that Sydney, and all the others who suffer from this dreadful disease can live a long, healthy, medication and pain free life!