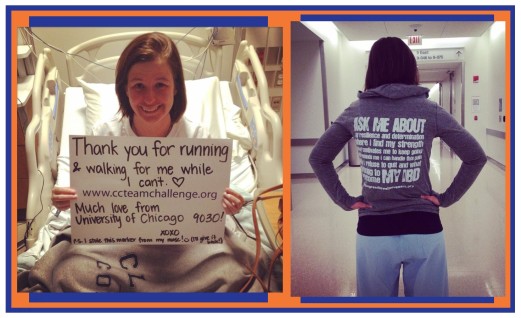 It’s been thirteen years since I was diagnosed with Crohn’s disease.

I remember pulling over on the side of a busy highway, calling my mom to ask, “Where is your appendix?” I remember days where I couldn’t get out of bed or make it to class. I remember sitting in class, fists clenched, trying to fight through the pain without anyone noticing.

I remember losing blood. Lots of blood. So much blood that at 3:00 one morning, I called home to tell my parents that I was dizzy and I was worried. Dad immediately canceled all his meetings and drove to Iowa to come pick me up from college. Mom got on the phone and somehow convinced a local gastroenterologist to see me that afternoon and schedule a colonoscopy for the following day.

At the end of that colonoscopy, I knew what caused the pain: Inflammatory Bowel Disease.

I went on a hefty dose of steroids that made me nauseous, puffy, and moody, and eventually the pain subsided.

Since my diagnosis in 2005, life with Crohn’s disease has been a complete rollercoaster. I could write a novel about the ways IBD has impacted my life – for better and for worse. Instead, here’s the abridged version.

2005 – 2010:
During these years, I was generally okay. Some days, I even forgot about my IBD. I had a few minor disease flares and more rounds of Prednisone and sick days than I would’ve liked. But on a day to day basis, IBD didn’t have a dramatic impact on my quality of life. I was luckier than I realized at the time. I ran my first marathon, completed my first triathlon, and even made the decision to start training for a Half Ironman!

2011:
Simultaneously one of the best and worst years in my life with IBD. In 2011, I trained for my Half Ironman with the help of an incredible coach. I was terrified but excited, and I put my heart and soul into that training. Just three weeks before the race, after all the hard work had been done and it was time to taper, I had an awful flare. I found myself loosing blood, having severe joint pain, and unable to get out of bed (except to run to the bathroom) some days. With the help of my family and my doctor, I made the heartbreaking decision to withdraw from the race.

This was the first time IBD had truly taken something away from me. Frustrated and sad, I stumbled upon Team Challenge for Crohn’s & Colitis in a Google search. I signed up for the Rock ‘n’ Roll Las Vegas Half Marathon, raised funds to help a cause dear to my heart. By the time race day rolled around, I was interviewing for a job at the Crohn’s & Colitis Foundation. Late in 2011, I found out I got it!

2012 – 2013:
I started my new job at the Crohn’s & Colitis Foundation and met some of the best people in the entire world who are now some of my closest friends. I learned more about my disease and began taking better care of myself. I went to see a gastroenterologist who specialized in IBD and found out that I actually have Crohn’s disease. My doctors encouraged me to consider stronger treatments, but I wasn’t so sure.

2014:
My first hospitalization. My second hospitalization. My first surgery. What a year. In 2014, my life was stressful. I could elaborate, but I’m long-winded enough without detailing all my stress. Suffice it to say there was an inordinate amount.

By the time I realized I was having a Crohn’s flare, I was existing on Pedialyte all day and eating just enough (plain) chicken at night to survive. I was so busy that I’d hardly noticed the tell-tale urgency and frequency of my bathroom visits. It had likely been going on for weeks before I noticed the blood. I was shocked when my doctor told me I needed to be hospitalized. I was even more surprised when my flare turned out to be resistant to steroids. I started a new medication during that hospital stay. After eight days in the hospital, I left with a new plan, and I eventually felt so much better. I spent June and July grateful for healing. I even completed a half marathon with Team Challenge in July!

In August, I volunteered as a counselor at Camp Oasis for the first time and had a magical week with my cabin of middle school girls. And then, on Wednesday, the pain started. Because I was at camp, there were doctors right there who could help me figure out what was going on. I started a course of antibiotics for my (not one, but two!) perianal abscesses and thought they’d clear up on their own. I left camp on Friday, and by Monday I couldn’t even sit. I went to see my own doctor and was admitted to the hospital that day for surgery.

Six days and two surgeries later, I was home, loopy on pain meds and hoping to never be hospitalized again.

2015 – 2018:
Simply the best! I am so grateful for Remicade, the medication that keeps my Crohn’s disease in remission. The bad days I’ve had remind me not to take these good ones for granted. I’m grateful for science, for research, for Remicade, and for remission. Most of all, I am thankful that remission allowed me to get pregnant and have my daughter, Alice.

It would be easy to be mad that I have Crohn’s disease, but at this point, it has shaped so much of my life that I can’t imagine not having it. I’m so glad to have met so many people along the way who are fighting for better treatments and cures. I’ll keep fighting alongside them until we get there.