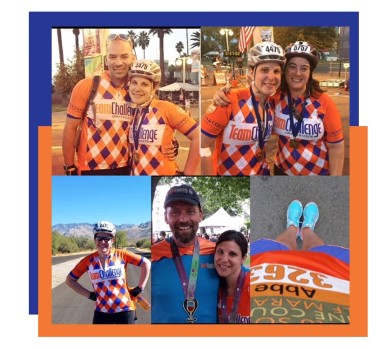 I started getting sick when I was a senior in high school and had my gall bladder removed one month before graduating. I spent a lot of college and most of law school sick and the doctors I saw said it was because of my gall bladder. Nearly 10 years later I had to have my appendix removed and the surgeon asked how I was treating my Crohn’s. I told him I didn’t know what Crohn’s was, let alone that I had it. I ended up in a full flare shortly after surgery and while home with all of that, I started learning about Crohn’s and for the first time, 10 years or my life made sense. It was scary to learn about my disease, but it was also empowering.  I had lived with pain, restroom issues, bleeding, fatigue and weight loss for 10 years and finally had an answer why, and the chance to look for answer.

In January 2010, complications from Crohn’s landed me inpatient for a month with no working bone marrow and a failing liver. There were blood transfusions, Nupogen injections, a lot of uncertainty and so many fears. It was the first time I really understood that Crohn’s could take everything from me.  I faced my disease head on and decided if I walked out of the hospital door, I’d live my life in the best possible way. This included joining Team Challenge for the first of 8 events (so far!). While it isn’t always easy, fighting my disease proactively by raising funds and awareness has allowed me to take back some of what Crohn’s has tried to take.

Through Team Challenge half marathons, sprint triathlons, and cycle events I’ve pushed my body in ways I never knew I could. I shared my story and helped others do the same. I’ve committed to living a healthy, active life and to fighting for my cure.

I’ve been fighting Crohn’s since I was 17. I turn 39 on June 13, meaning I’ve had this disease for more than half of my life. I’ve gone through lots of treatments to find the one that will keep my symptoms in check and allow me the quality of life I want. Every day isn’t easy. Some are downright terrible. But I’m lucky to have a wonderful family, incredible friends, and a fantastic care team that support me and cheer me on.

Crohn’s is a battle every day. I wouldn’t wish it on anyone. But this disease has given me the chance to see and do some amazing things. It has brought me friends who are family and experiences I wouldn’t trade for anything. In spite of, and because of, my Crohn’s, my life is crazy beautiful and I love every minute of it.