I first met Bill when he signed up to run the Falmouth Road Race with Team Challenge last year. This race is a favorite of mine and over the past few years I’ve offered my advice to the team covering training and details about the course itself. Bill was so enthusiastic and genuinely excited to take part in this popular race. I was excited that he was going to run it wearing the orange Team Challenge singlet. There is nothing like seeing someone who has been dealing with Crohn’s or colitis do something they didn’t think they could do. Running is one of those things for a Team Challenge participant who is also a patient. Bill found running a few years ago and saw what it did to him and how it made him feel. He fell in love with running and it’s been amazing to see what he has accomplished in such a short time.

Not only did Bill find running but he found the joy of running races having done so really good ones all over New England. I feel for all runners who enjoy racing because this pandemic has put a hold on pretty much every local race since March. Trying to fill this void, 26.2 For You had some virtual races over the summer and Bill, and his family, took part in all of them. Even Bill’s son William took part and completed these races and earned some medals, catching up to his dad’s collection. If there is something for Team Challenge and it supports the Crohn’s & Colitis Foundation, Bill is all for it. I’m grateful for all the support he has shown me with all I do and it was really cool to know he was going to run with me today.

The original plan was to meet up and run this marathon together but the weather and the increasing positive cases of Covid all over the state made things a little more complicated. We decided that it made more sense to stay home and run separately today but still run together, just cover our 26.2 apart.

For my marathon, I decided to stay indoors and run the entire 26.2 miles on the treadmill. We ended up getting a storm early in the week that dropped over a foot of snow in the town I live in. Most of the roads around my house do not have sidewalks and the shoulder is very narrow if there even is one. With this storm and the sub-freezing temps that followed, the roads are not that safe for running, especially for hour after hour. The roads that do have sidewalks still are covered in snow so using them is not happening so any running would be on the roads. I’ve been preparing for longer treadmill runs so this was expected and the idea of running on the treadmill, inside just means I didn’t need to worry. I don’t have to think about my foot falls and possibly hitting an ice patch and I don’t need to worry about sharing the even more narrow roads with cars. Being inside I could focus my attention on getting through the miles mentally without any of those other outside hazards. Once we have some warmer temps that can melt some of the ice and snow I’ll be back out on the roads, but today the treadmill made more sense.

How did it go and how do I feel? The answer to both is great! I honestly feel good and my body is definitely getting used to the distance, adapting to running for three plus hours at some point each weekend. I anticipated I would start to grow accustomed to the demands of running 26.2 miles once a week but never imagined how much my body would get used to it. It doesn’t feel as daunting as it used to and my body is not nearly as sore as when I first started running marathons years and years ago.

I’m also happy to report that Bill made it through and crushed his marathon today too. Bill ran his marathon outside in his hometown so he gets bonus points for that and makes what he did just that more impressive.

It was such an honor to run for Bill today and share his story with Crohn’s. It was even more of an honor to know he was out there running a marathon with me today. I came up with the idea of running marathons for others naming this challenge 26.2 For You, but today it was more like 26.2 With You.

I was honored with today’s marathon and for what Bill did. Having him run his very first marathon “with me” today and as a part of 26.2 For You was just awesome. I’m incredibly proud of him for how resilient he is and how far he has come with running. I knew he could do a marathon and I also knew no matter what he’d finish 26.2 miles today. Bill has the support of his family and his TC family and with those two groups being there for him, there is going to be nothing that stops him from doing anything he wants.

Bill, it was an absolute honor to run for you today and share your story. I was and still am blown away by what you did today. I’ll say it again, I could be more proud and I’m not at all surprised. You are as tough and determined as they come and I’m happy to call you a friend. You capped off 2020, a year that has been full of unexpected things, with something you probably never expected you’d do back when you first started running. You’ve come a long way in such a short period of time but that is no surprise. I can’t wait to see what’s in store for you next, after a little rest and recover first. Congrats and thank you again for everything. This 26.2 was for you and with you today! 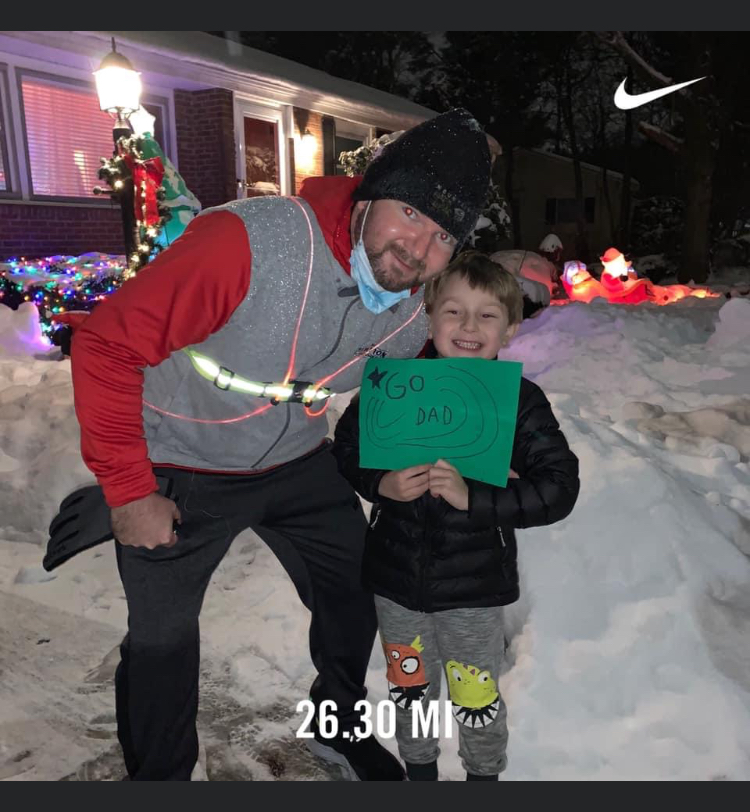 Bill with his son, William, after finishing his marathon today.