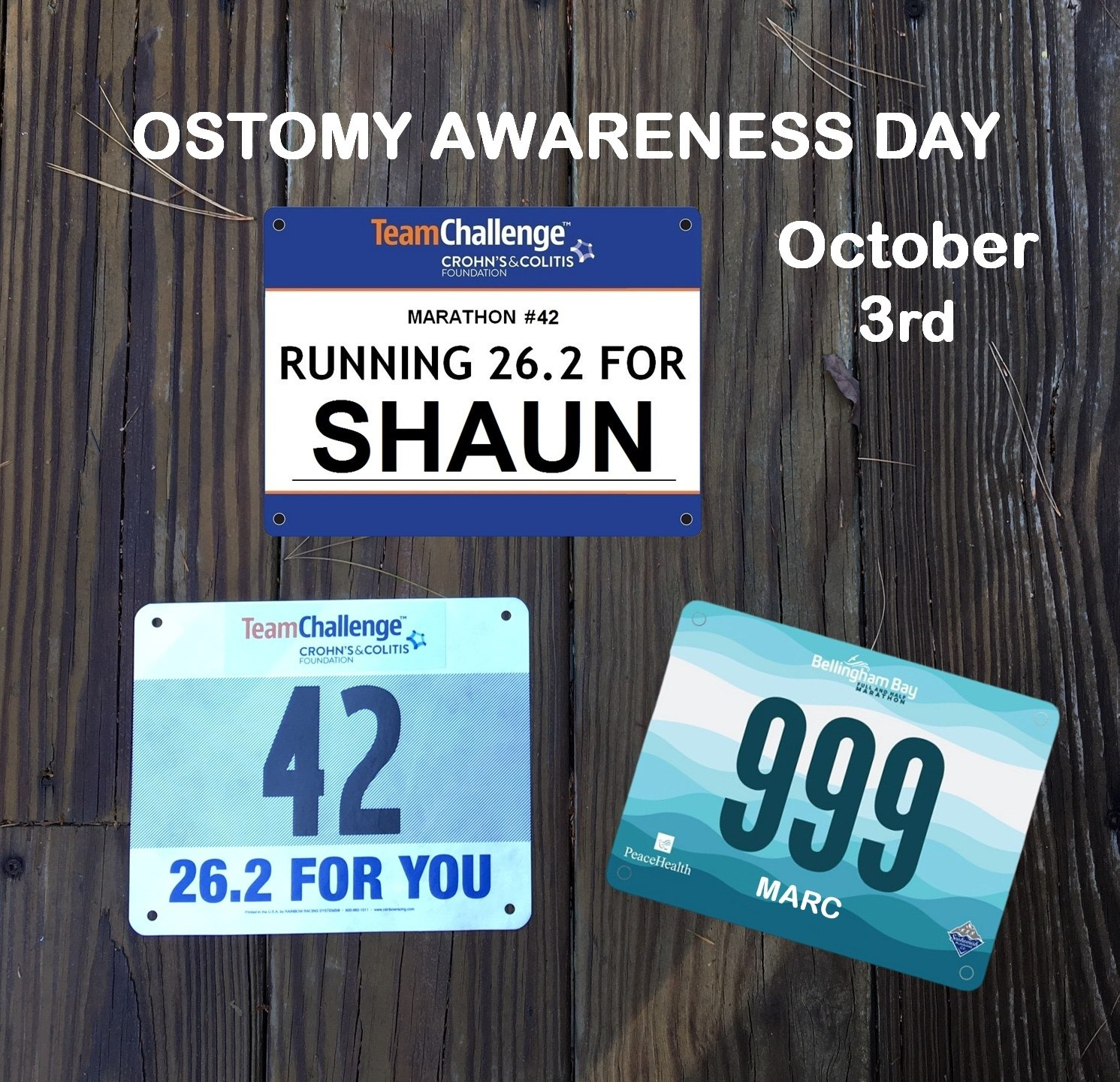 With October 3rd falling on a Saturday this year, it worked out that I was going to run a marathon on Ostomy Awareness Day. Really, any day I’m able to get out there and run a marathon and share a story is a great day, but this particular day just seemed to line up perfectly. To pair this marathon for Shaun, I couldn’t think of a better person to run for, on Ostomy Awareness Day.

I first met Shaun through the foundations Young Professionals Committee here at the New England Chapter. It was during the time leading up to one of their major events called “Night in White.” This is a fun-spirited evening of IBD fundraising, live music, inspiring speakers, and more, that happens annual each spring. Everyone where’s white, hence the name, and it’s such a great night that raises over 100K each year alone. Shaun plays a major role in the success of this event and is part of this amazing team that helps the foundation in so many ways.

It was during the time leading up to Night in White a couple years ago that I was able to see Shaun’s enthusiasm, hard work and dedication towards this cause, firsthand. I also learned that Shaun was a patient because he was very open about the fact that he was from second I met him. Shaun talked about how he had an ostomy, and had for a large portion of his life. One thing I couldn’t help but notice, or maybe not notice is a better way to phrase it, is that you would never know he has an ostomy if he didn’t say anything. I say this because Shaun doesn’t act any differently, he doesn’t limit himself to what he can or cannot do. Shaun lives his life and and doesn’t let the fact that he has a bag keep him from living a life he wants to live.

He mentions in his story that his bag has been there for all the major moments in his life and what I love about that is the fact that he continues to have major moments. He could very easily let his situation hold him back, prevent him from going after major milestones, yet he doesn’t. I wasn’t there to see the had times Shaun went through at a young age, that struggle. But what I did see is how he has turned that struggle into determination and became the person, the advocate he is now. Meeting Shaun was great, getting to see how passionate he is about awareness, about finding better treatment for patients and for doing all he can to help up get those cures we need.

Like I said, I couldn’t have picked a better person to run for on Ostomy Awareness Day and his story is one that needs to be shared not just one October 3rd, but everyday. The Young Professional Committee here in New England is very lucky to have him on board and I know he feels the same way about them.

Also, Shaun himself is a runner and has run for Team Challenge as well. There isn’t much he hasn’t done including running half marathons and even covering 26.2 miles, all with his bag of course! Shaun has become a friend and I couldn’t be happier to be in this fight alongside him. Sharing his story will only help those in similar situations, proving that just because they have a bag doesn’t mean they can’t live a life they want to live. They can doing anything they want to do and Shaun is the shining example of that. Thank you Shaun for being so open and honest with your story. You passion for the IBD community is inspiring and just plain amazing. I am honored to be able to run for you, so thank you my friend!

As for the marathon itself, I couldn’t have asked for a better day to run. Cool fall temps meant long sleeves, still wearing shorts (no surprise if you know me), but nice crisp cool air to start the morning. To be honest I was still feeling the hills and the 26.2 miles from last weekends marathon so I eased back the pace and kept to the flatter roads around the neighborhood for this course.

Running is always something I’ve enjoyed doing and Saturday’s run was just great. Maybe it was the fall weather finally or it could have been getting out there while it was still somewhat quiet with people staying inside a little longer before it warmed up. I did run by a few houses where there was the smell of smoke from the wood stove burning inside, which heightened the sense of fall in New England. It’s been years since I’ve run outside with headphones which lets my other senses pick up on different things. I do my best to take it all that is around me but sometimes all I need to hear is the rhythm of my feet gliding across the pavement in perfect harmony with my breathing. After years and years of running I’ve managed to get my body and mind to work as one cohesive unit taking me from that first step all the way to the last, 26.2 miles later.

Like the previous few marathons, I broke this one up into two parts, the first taking place outside before transitioning inside to the treadmill. For the record, I’ve never been a big fan of running on the treadmill. I don’t hate it, but I’d prefer to run outside almost every time. However, I’ve decided to change my mindset about treadmill running and breaking this marathon, as well as the previous ones, was planned and is something I wanted to do. I’ll explain my plan with this more over the next couple marathons, so stay tuned.

The treadmill portion of this marathon felt great and my legs definitely enjoyed the lack of elevation as my pace showed. I was able to set the speed, zone out, and just turn the legs over, with som ease, covering the final miles while feeling strong. Treadmill running can be boring and isn’t always fun, but I’m finding the benefits of doing it and feel it’ll help me become a better runner. Again, more to come on this topic later.

Marathon 42 is done and there are just 8 remaining over the next three months. My body is feeling good, my mind is confident and my heart is stronger than ever! This journey has taught me many things and I’m still learning something new with each and every marathon. The sharing of the stories will continue and the all miles will be completed. Crohn’s Disease and ulcerative colitis don’t stand a chance and we are proving that with each marathon, one mile at a time.

A huge thank you to Shaun for being a friend and an IBD hero, not just to me but to so many. The foundation is lucky to have someone like you on their side and I know we are getting closer to those cures because of your efforts as well as the entire Young Professionals Committee. You guys are the best and I’m honored to know so many of you! Thank you Shaun for letting me run for you on Ostomy Awareness Day! This 26.2 was for you!