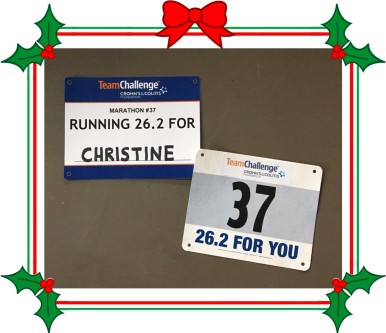 Merry Christmas! Yesterday’s marathon took place on Christmas Eve and I was honored to run it for Christine. The stories I have shared with the previous marathons have been hard to read at times. They have involved a lot of information and details that really tug at your heart strings. Obviously, I feel that those unbelievable stories should be shared and I feel grateful that those IBD heroes allowed me to do so with 26.2 For You. However, I also wanted to make sure I shared stories of those who still have Crohn’s disease and ulcerative colitis but have not hard quite the hardships as others. Everyone who battles IBD has their own unique fight on their hands. Symptoms can vary widely with some really suffering daily when some generally feel good day to day. Treatment options can range with some on very aggressive medications while others can control things with just diet alone. Others also have had multiple surgeries with vary lengths of intestines removed sometimes even having their colon’s removed. Then there are the ones like Christine who have found a combination of medication and good doctors that have her in remission and asymptomatic pretty much the entire time.

What makes her story, which fortunately lacks all the craziness that can come with IBD, so important to share? Simple, it is a story that can give hope. Christine’s story is one of hope because those who have had it tough can look at this and see that there is a possibility for them to get to the same spot Christine is in. Remission is possible and it can happen, proving that the fight they are in can get better. Christine is proof of that and she is a perfect example of how this disease doesn’t have to control your life.

I really wanted to share as many different stories as possible showing the wide range of ways these diseases affect so many. It is not always the same and even though we don’t have cures yet, remission is still possible!

What is unfortunate is that Christine’s story doesn’t end with her. Her husband Pete was diagnosed with ulcerative colitis and his story wasn’t as positive as Christine’s. More to come on that very soon…

I have known Christine for a few years now and it was through Team Challenge, more specifically the cycle program, where we met. Christine signed up to pedal for a cure, after having done a few half marathons also with the program. One of the best parts of coaching the cycle program year after year is the front row seat I have to see people progress as cyclists. Christine is the perfect example of this as she just completely another cycle event this past fall riding 100 miles in Little Rock, Arkansas. This was her first century ride on the bike and something I sure she never thought she would have done when she first started riding. I couldn’t have been more proud of her, not just for those 100 miles, but for the hard work and time she has spent riding for cures over the years.

As for running and the marathon itself, this was another one that I ran entirely on the treadmill inside. Yes, 26.2 miles in one shot, in one place, at one time. One of the things I pretty much detest with running is the treadmill, I’ve never liked running on one, but I own one and I do use it from time to time. There is a method to the madness of why I decided to run the entire time on the treadmill, especially considering the weather outside yesterday morning was mild and clear. More to come on this later as well…

What I can tell you is that I went into the run yesterday with the proper mindset. I just kept telling myself that the treadmill isn’t bad and kept trying to think positive. It really did work and I was able to push through each mile until I hit the 26.2 mark. Normally I don’t listen to music when I run, but for this marathon music was a must. I was able to zone out to a custom playlist of songs that would help me get through the miles. With the right mindset, the music playing and a small fan strategically placed in front of me on the floor, I can honestly tell you, it wasn’t that bad. Setting yourself up to be successful goes a long way in helping you create some comfort which can lead to positive results.

Marathon 37 is done and I was honored to share Christine’s story for this one. I hope that those who are suffering and really struggling with IBD right now can read this and feel some of that hope knowing one day soon, they too will be in remission. Thank you Christine for all you do for yourself, for Pete, and for all those who fight IBD. You are a true IBD hero and I’m happy to call you a friend.