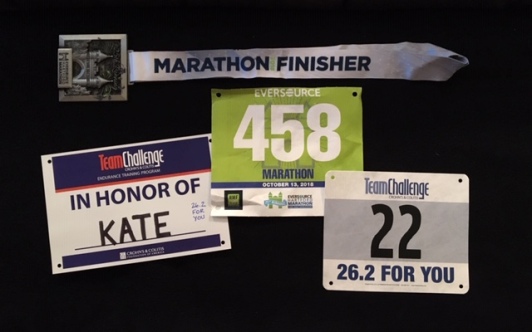 Sometimes we need to listen to our bodies and we need to take the advice our coaches give us and run smart. Today was the Hartford Marathon in Connecticut and if you noticed the schedule I was originally planning to run a trail marathon today in Vermont. A very busy week, lack of sleep on top of actually not feeling all the well the past couple days had me change my plans and stay a little closer to home instead of heading up to Vermont. Sometimes we just need to be smart, adjust and scrap plan A to go with plan B. Having a shorter drive home post marathon to get some more time to rest sounded a lot better to me.

Not feeling all that great and running left some uncertainty as to how I’d feel and how I’d do in this marathon. I was happy to be on the roads for this one as opposed to the trails in VT. I figured I didn’t have to think too much about my foot placement like I would have had to do on the trails. Trail running can be mentally tiring because of all the factors you have to take in and process before each step. I know I didn’t have the mental capacity to handle that today so it was back to pounding the pavement instead. It turned out I wasn’t the only thing to be pounding the pavement today because when I woke up this morning, it was raining. I love running in the rain so this was actually exciting and something I was looking forward to doing. The sun did come out; however it wasn’t until I was done and actually pulling into the driveway at home. It rained the entire time out there today and it was very similar to the conditions in the Chicago Marathon last weekend. Temperature in the 50’s and rain, except it eventually stopped during Chicago and here today it didn’t.

I started running today the same way I have started each one of these marathons this year, allowing my body to dictate how fast I go. The cool and wet conditions made it easy to get into a good groove early and I wasn’t sure how long I could keep it up. To my surprise it held up the entire time as I averaged 8:15/mile for the first 20 and then slowed do just slightly 8:30/mile for the last 6. I felt great when running and my head cleared up allowing me to breath just fine for the whole race. You never know how you are going to feel and I didn’t have that much confidence going into this, but I think changing my plan worked and I made it through 26 miles just fine.

Today I ran for Kate, who is the definition of IBD Warrior! Kate is the very first person I ever met who was diagnosed with ulcerative colitis and one of my first connections to Team Challenge. When I met her she had already been through so much with this disease and my heart went out to her and her husband Ben for all that they had been through. Unfortunately she has been through so much more since I’ve known her too. She has had a very tough battle with the disease and has dealt with more than anyone I have known. I have personally seen this disease try to take her down and control her life, on multiple occasions. It’s been one thing after the next, but this is Kate and I also have seen the fight and determination (stubbornness) that Kate has and I know this disease can’t defeat her. No matter how hard it tries Kate just refuses to give in or give up. I call her an IBD Warrior but she is my IBD Hero!

I had the opportunity to coach with Kate my very first season in 2010 and I saw the effect she has with others on the team. Even when she wasn’t feeling her best, she was there for anyone and everyone who needed support, with running or with their own battle they were dealing with. She has a genuine ability to help others and I was honored to be on a team with her with Team Challenge. I have been friends with Kate since we first met and I have continued to see her preserve and also have her daughter, Scout, despite all she has been through. Scout is a happy, smart and most importantly healthy little peanut who has two amazing parents as role models. Finding a cure is so important not only for Kate, but for her daughter, so she doesn’t have to worry about or deal with ulcerative colitis or Crohn’s disease.

Thank you Kate for being my hero and for all the inspiration you give me, and so many. You have played such an important role in my Team Challenge experience and I can’t thank you enough for that. Running for you and sharing your story is something I was so happy to have been able to do both for you. Continue to fight and keep being so strong to so many, including me.